The FCC imposes a ban on equipment from Huawei and ZTE, camera providers Hikvision and Dahua, and radio maker Hytera, citing "a risk to national security" (Todd Shields/Bloomberg) by Todd Shields
Saturday November 26th, 2022 at 12:54 AM

Man who has worked in government and academia drawing guaranteed paychecks for his entire life tells man who has built company with 100,000 employees how companies work twitter.com/RBReich/status… by Alex Berenson (AlexBerenson)
Saturday November 26th, 2022 at 12:53 AM

Man who has worked in government and academia drawing guaranteed paychecks for his entire life tells man who has built company with 100,000 employees how companies work twitter.com/RBReich/status…

Much of a corporations' value lies in their workers — their knowledge, skills, and ideas.

When he fired half of Twitter’s workforce and drove off even more, he wasn't “cutting costs.”

He was actively destroying what he bought.

Charles was one of the most powerful men of the 16th century, presiding over a vast empire that took in much of western Europe and the Americas during a reign of more than 40 years.

It took the team from the Loria research lab in eastern France six months to decipher the letter written in 1547 by the emperor to his ambassador in France.

The tumultuous period saw a succession of wars and tensions between Spain and France, ruled at that time by Francis I, the Renaissance ruler who brought Leonardo da Vinci from Italy.

The letter from Charles V to Jean de Saint-Mauris had languished forgotten for centuries in the collections of the Stanislas library in Nancy.

Cecile Pierrot, a cryptographer from Loria, first heard of its existence at a dinner in 2019, and after much searching was able to set eyes on it in 2021.

Bearing the signature of Charles V, it was at once mysterious and utterly incomprehensible, she told reporters on Wednesday.

“Whole words are encrypted with a single symbol” and the emperor replaced vowels coming after consonants with marks, she said, an inspiration probably coming from Arabic.

In another obstacle, he also used symbols that mean nothing to mislead any adversary trying to decipher the message. The breakthrough came in June, when Pierrot managed to make out a phrase in the letter, and the team then cracked the code with the help of historian Camille Desenclos.

“It was painstaking and long work but there was really a breakthrough that happened in one day, where all of a sudden we had the right hypothesis,” she said.

Another letter from Jean de Saint-Mauris, where the receiver had doodled a form of transcription code in the margin, also helped. 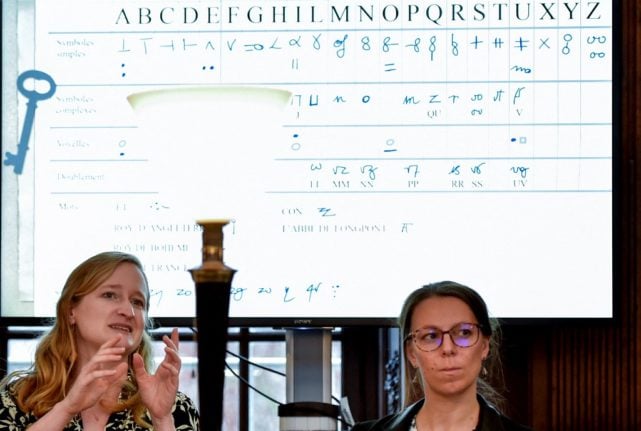 Researcher at the French National Institute for Computer Science Research (INRIA) Cecile Pierrot (L) and senior lecturer in modern history Camille Desenclos (R) explain the decoding process of an encrypted letter from Charles V, known as Charles Quint, the Holy Roman Emperor and Archduke of Austria, dated back to 1547, at the Stanislas library in Nancy, northeastern France, on November 23, 2022. – Researchers in computer science, a cryptographer and a historian decrypted the letter from Charles V dating back to the 16th century. (Photo by Jean-Christophe Verhaegen / AFP)

Desenclos said it was “rare as a historian to manage to read a letter that no one had managed to read for five centuries.”

It “confirms the somewhat degraded state” in 1547 of relations between Francis I and Charles V, who had signed a peace treaty three years earlier, she said.

But relations were still tense between the two, with various attempts to weaken each other, she said.

So much so that one nugget of information revealed was the rumour of an assassination plot against Charles V that was said to have been brewing in France, Desenclos said.

She said “not much had been known” about the plot but it underlined the monarch’s “fear”.

The researchers now hope to identify other letters between the emperor and his ambassador “to have a snapshot of Charles V’s strategy in Europe”, she said.

“It is likely that we will make many more discoveries in the coming years,” the historian said.

French households have so far been extremely fortunate compared to their European neighbours, and have seen minimal or no rises to their utility bills. This is because the government imposed a price freeze on gas prices and a maximum four percent rise on electricity prices, but both of these measures expire at the end of this year.

EXPLAINED What your French energy bills will look like in 2023

The government is also currently helping out motorists with fuel prices using the fuel rebate – which is applied at the pump and results in lower costs to motorists filling up their cars. In mid November this fell from 35 cents per litre to 10 cents a litre, and will disappear entirely at the end of the year.

Instead, there will be targeted help to low-income households and people who use their car for work, although full details of how this will work have not yet been revealed.

OPINION An inflation ‘tsunami’ is about to hit France

The price of food has already risen significantly since 2020, but supermarket boss Michel-Edouard Leclerc (head of the E.Leclerc chain) has warned of a “tsunami” of price rises in 2023.

This is largely due to suppliers increasing prices, he said, after trying not to pass on price rises to customers in 2022, so is likely to affect all supermarket chains.

Leclerc himself listed some of the predicted rises with preserved fruit and vegetables rising by around 20 percent, animal products by 15 percent and coffee by 10 percent.

Rising prices from food suppliers will also have a likely knock-on effect on the prices at restaurants and cafés.

Train tickets are also set to rise in 2023, to cover rising utility costs for the company, although the transport minister requested that the state-owned SNCF apply a ‘price shield’ to rises.

The average price rise will be five percent, applied on TGV services and regional trains. The price rises will come into effect “in 2023” with no exact start date given.

Public transport users in Paris are also likely to see price rises, with the monthly Navigo pass set to rise to either €80 or €90 – negotiations are still ongoing.

The price of clothing around Europe has already risen and is projected to rise by between five and 20 percent during the final months of 2022 and start of 2023, according to the Union des industries textiles (textile industry union).

This is related to the rising price of oil since Russia’s invasion of Ukraine – oil is needed to make certain fabrics like polyester while rising fuel prices also have an effect, since 96 percent of clothes on sale in France are made abroad.